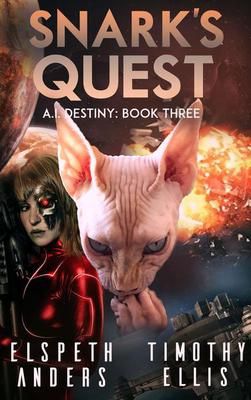 See more by Timothy Ellis, Elspeth Anders
Get it now

Timothy Ellis lives on the Gold Coast, Queensland, Australia; where he constantly battles with his cat for possession of his desk chair, Daleks do guard duty, and he keeps his sonic screwdriver next to his lightsaber and wand. Now there is to be a female Doctor Who, he eagerly awaits the sound of the Tardis materializing in his house.

He has spent his life reading and watching science fiction and fantasy, and has been playing Space Genre computer games since he used to be smuggled in to play the original text Star Trek game on a university mainframe, long before the PC or Apple appeared. Since 2004, he's written game guides for the Egosoft X Universe series, culminating in two versions of the X3 Handbook. He has also designed major mods for the various games, and dozens of mini mods.

He has been a farm worker, Antique Dealer, Computer Programmer, Systems Analyst, Operations Manager of a small retail chain, and Retail Store Owner. He is now a full time author, who also works as a Spiritual Healer and helper.

After leaving behind the corporate and business worlds, he was opened to his Spiritual gifts. Now a Feng Shui Master, Feng Shui led him to Buddhism, Karma, the Tao, and back to western spiritualism. Since 2006 he has been writing spiritual articles and helping people via spiritual forums and Facebook Groups. His spiritual books include "Personal Healing Using Basic Meditation", "Life Harmony, Feng Shui in Plain English", '101 Tips for the John of God Brazil Experience', and "The Wisdom of the Ages is available for the price of asking a question" series of 8 books.

His first novel series, 'The Hunter Legacy', beginning with 'Hero at Large', brings together his love of the space genre, spirituality, and cats.