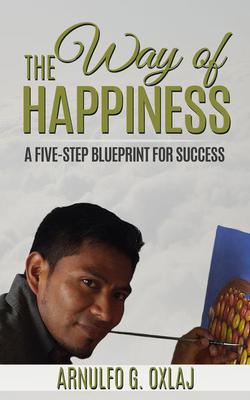 The Way of Happiness: A Five-Step Blueprint for Success

See more by Arnulfo Oxlaj
Get it now

Indigenous activist, teacher and author Arnulfo Oxlaj was born blind, deaf and mute in the midst of the armed conflict in Guatemala. He spent eight years in silence and darkness until his sight, hearing and voice were all given to him in a single day. During this time, he learned to see the deepest truths of life with the eyes of his soul.

Just weeks after this miracle occurred, a terrifying experience would have a profound impact on his life. Arnulfo Oxlaj's childhood ended abruptly when soldiers broke into his house and threw him and all the village children into a deep well to die. On the fourth day, guerrillas came across the well, saw Arnulfo’s head protruding from the mountain of small bodies and pulled him out. Of 116 children, Arnulfo was the only survivor.

In the well, Arnulfo saw that there is a war inside of each human being, and that we need to remove the veil that hides the truth from us in order to be truly free and live our mission in the world. Grateful for his life, Arnulfo made a promise: to dedicate his life to helping others and delivering a message of peace to humanity. In that moment, his NGO AMOR was born.

Shortly thereafter, Arnulfo began going from house to house with food and medicine. He began to dream of a rebirth starting in his home village, a ´revolution´ of love and generosity, a chance for all people to finally contribute their gifts to the world.

The next few years were devoted to integrating this experience and strengthening his gift. Later, he began to work in Guatemala, North America and Europe with individuals and small groups as a counsellor and teacher.

Since then, he has worked with thousands of people at public events and conferences, in prisons, hospitals, churches, corporations, universities, schools, camps, even brothels. Many who have received his teachings and healings report profound experiences and lasting transformations.

Arnulfo Oxlaj is the author of the The Light of the Soul, hailed a 'gift for the heart of humanity', 'its simplicity a great blessing', and provoked comments such as 'I actually feel privileged to have read this book. Deepak Chopra, move over.'

On his website, www.arnulfooxlaj.com, you will find further information about Arnulfo, his work and message, blog, books, free materials, audio and video teachings.