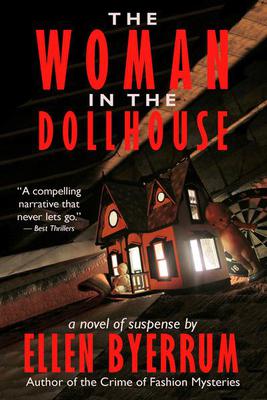 The Woman in the Dollhouse

See more by Ellen Byerrum
Get it now

Ellen Byerrum is a novelist, a playwright, a reporter, a former Washington, D.C., journalist, and a graduate of private investigator school in Virginia. Her Crime of Fashion mystery series stars a savvy, stylish female sleuth named Lacey Smithsonian. Lacey is a reluctant fashion reporter in Washington D.C., which she lovingly refers to as "The City Fashion Forgot.”

The Masque of the Red Dress is the latest--and the 11th-- in the series, which begins with Killer Hair.  Two of Byerrum’s Crime of Fashion novels, Killer Hair and Hostile Makeover, were filmed for the Lifetime Movie Network.

The Woman in the Dollhouse is Byerrum’s first suspense thriller. It introduces us to a young woman, Tennyson Claxton, whose mind seems to hold the mingled memories of two very different women. Her past is full of questions, her present is filled with deception and danger, and her future is a blank page—unless she can discover who she really is. Byerrum anticipates exploring Tennyson’s continuing odyssey in a future novel.

Byerrum has also penned a middle-grade mystery, The Children Didn’t See Anything, the first in a projected series starring the precocious twelve-year-old Bresette twins.

Under her pen name Eliot Byerrum, she has published two plays with Samuel French, A Christmas Cactus and Gumshoe Rendezvous. She is currently working on a new play.
​​​​​​​