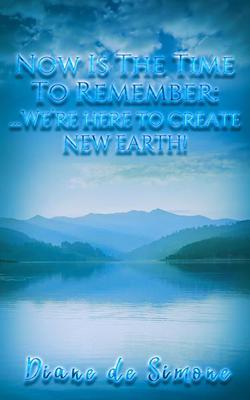 Now is the Time to Remember: We're Here to Create New Earth

See more by Diane de Simone
Get it now

Diane wrote for many top national and international magazines before she became passionate about the "new" science of the brain in the late 1970 and 80's. She wrote an unprecedented, well-publicized, seven part series for Playboy on the subject with British filmmaker and author, Jo Durden-Smith, as well as the book: "Sex and the Brain." "Sex and the Brain" was the first published book for the layperson on the late 20th century heady time in the biological sciences, when researchers were peering into the human body and brain and asking: "so, who are we as a species?" Some were focusing on the differences being found between the sexes not only in body, but also in brain and behavior, endocrine and immune systems-- and thus "Sex and the Brain" which scrutinized this research, met the scientists, and describes the evolutionary nature of the equality of women and men, and how psycho-biologically they are subtly different, and also complementary...not unlike males and females elsewhere in nature. In the late 1990’s and early years of the twenty-first century, she held a private psychotherapy practice and co-created two co-housing communities, and also wrote a memoir tucked into "Feathers Brush the Heart" (Warner Books 2002 ed. Sinclair Browning). She’s also the author of "Dear Thailand: A Love Story" (Amazon, 2013) a memoir about discovering a land, a people, and a culture that can radically reshape many a heart. "Reconciliation ~ Heaven and Earth ~"  was published in 2018. It's about what we can learn from astrophysics. A number of stories inspired this fictional tale, the most notable of which was an unresolved murder of a scientist involved with Extraterrestrial technologies who she'd respected for years. Because of it, she jumped in to research the entire ET field, editing out the woo-woo. It concerns itself with a woman who is forced to confront her beliefs on the nature of reality after she discovers her astrophysicist husband was murdered, and a small metal orb-- about the size of a softball -- that her husband coveted -- has ETI (extraterrestrial intelligence) and communicates with her telepathically! It's an intriguing, engaging tale with some murder and mayhem, also with physics -- and a sweetness to it. It tells of secrets astrophysicists know. In 2018, a very short, easy to understand, musical, interactive book was published,..."stepping lightly through times of great change"  asking us all to WAKE UP! Scientists are finding we are far more powerful and peaceful than we believe we are! She currently lives between Tucson, Arizona, and Thailand, with her artist partner, James Lewis Hamilton, passionate about Thailand and “the force, the quantum field, transformation, and healing.”