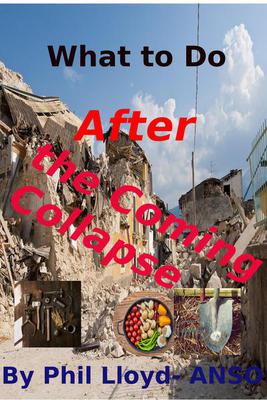 What to Do After the Coming Collapse

See more by Phil Lloyd
Get it now

Growing up in a family of Printer/Publishers, it is only natural that the Author would eventually return to his roots, writing under his own name as well as under the pen name 'Hermit The Writer'.

Although his Father offered him the opportunity to carry on the family Publishing business, he decided to set off in a very different direction, first helping his Father sell the business and then easing him enter into an early retirement at age fifty.

Over his working career, the Author successfully supported his family as a computer programmer and eventually as manager in the Academic community and later in the Aerospace world.

Seven years as a Entrepreneur running his own computer Consulting, installation and supplies business followed by a Teaching post at the High School level for students with Learning disabilities, completed the Author's compulsory work activity.

As a Cancer Survivor of many years himself, it was a devastating blow to lose his life partner to Breast Cancer at the end of a six-year battle.

It was, at this point where the Author's epiphany occurred, showing him an Alternate Strategy, a new way for all of us to live. One that removed Money, removed Currency and Profit from the equation, leaving us with a lot less Competition and a lot more Co-operation, with true Sharing instead of Profiteering as the basis of our daily lives, for both the Individual and at the Community level.

Applying this principle, this idea, the Author spent the past eight years of his retirement working on the details of a plan to Eliminate World Poverty.

His TTPP project incorporates a natural, non-technical Solution for Global Warming while providing a "step up" for those Below The Poverty Line (BTPL), at the same time.

His intention now is to implement "A New Social Organization" worldwide, that is equitable and fair for each World Citizen on the planet. He hopes that, with the help of other like-minded individuals, he can leave a better Legacy for his children, his grandchildren and now great grandchildren.