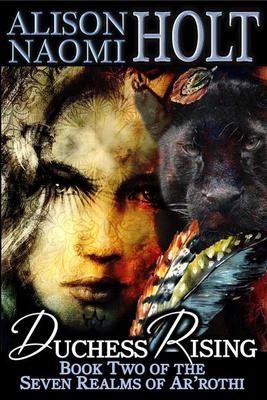 See more by Alison Naomi Holt
Get it now

Alison, who grew up listening to her mother reading her the most wonderful books full of adventure, heroes, ducks and puppy dogs, promotes reading wherever she goes and believes literacy is the key to changing the world for the better.

In her writing, she follows Heinlein’s Rules, the first rule being You Must Write. To that end, she writes in several genres simply because she enjoys the great variety of characters and settings her over-active fantasy life creates. There’s nothing better for her than when a character looks over their shoulder, crooks a finger for her to follow and heads off on an adventure. From medieval castles to a horse farm in Virginia to the police beat in Tucson, Arizona, her characters live exciting lives and she’s happy enough to follow them around and report on what she sees.

She has published six fiction novels and one screenplay. Her first novel, The Door at the Top of the Stairs, is a psychological suspense, which she’s also adapted as a screenplay. The Screenplay advanced to the Second Round of the  Austin Film Festival Screenplay & Teleplay Competition, making it to the top 15% of the 6,764 entries. The screenplay also made the quarter finalist list in the  Cynosure Screenwriting awards.

Alison has also written three books in the Alex Wolfe Mystery Series, Credo's Hope (which reached #6 in Amazon's ranking for murder mysteries), Credo's Legacy and Credo’s Fire. She has also published three novels in the fantasy fiction genre, The Spirit Child and Duchess Rampant, and The Mage of Merigor.

Alison's previous life as a cop gave her a bizarre sense of humor, a realistic look at life, and an insatiable desire to live life to the fullest. She loves all horses & hounds and some humans…

To find out more, go to her website at www.alisonholtbooks.com.