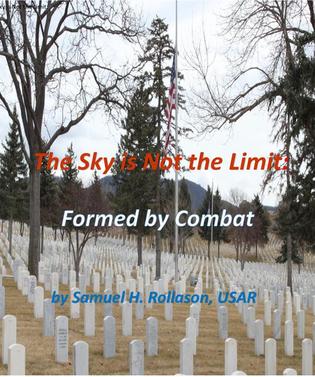 The Sky is Not the Limit: Formed by Combat

See more by Samuel Rollason
Get it now

Born in Harrisburg, Pennsylvania Sam enlisted in the military in 1965 with the intent of becoming a helicopter pilot. He served in Vietnam in 1966-67. He was wounded on three separate occasions and shot down five times, the last time causing him to spend nearly two years in multiple military hospitals. He was medically retired late in 1968.

His love of flying caused him to initially seek employment as a civilian pilot in Louisiana. He flew for a short time off-shore in the Gulf of Mexico for Petroleum Helicopters.

Sam returned to school and eventually became a Full Professor at Louisiana State University,producing science news of current research, and continuing his own research. During his tenure at LSU he was fortunate to be able to participate in a diversity of research projects as principal investigator and as an adjunct researcher.

During his time at LSU he also worked as a bi-vocational pastor, wrote a newspaper column, and had a talk radio show. He was active as a Pastor and led a number of interdenominational Bible studies in the community and was active in the Episcopal Student Center on campus.

Principal researcher in evaluating the use of Hypnotherapy as an Adjunctive therapy to Radio and Chemotherapy in the treatment of Breast Cancer.

Presenter at international Symposium on the “Integration of Eastern and Western Medicine” in Wuhan, China.

Member of the research team that was first to Propagate Plants in Micro-Gravity aboard the Space Shuttle Columbia and long term on the Mir Space Station.