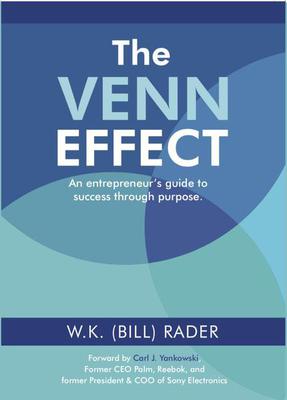 Bill Rader is a life-long entrepreneur who sold his first company at age 18. To date, he has launched five ventures, including his most recent Efferent Labs, Inc., and orchestrated multiple M&A's.

Bill started Efferent Labs after inventing the medical infusion device. Since mid-2011, he has created alliances with major universities, merged a university-sponsored startup into the company, and now hold patents to many promising technologies.

Bill is a paid columnist for Forbes Media and had a column featured in Inc.  He has had more than 1,500,000 people read his stories.  In the past, Bill was a contributing editor to Triple D Publishing's Home Theater Magazine.

In 2015 Bill had a successful exit from the company he founded in 1998, Raland Technologies, LLC, a consulting and products company. He grew the company organically as well as through M&A. The company grew substantially during his leadership, landing it on the Inc. 500|5000 lists with worldwide clients and operations.

He started his tenure in the early 1980's in the engineering sector of the U.S. Navy as a Nuclear Engineering Reactor Controls member of the Submarine Fleet. Bill holds a Bachelor of Science in Electrical Engineering, is a member of Harvard Business School, Business Innovations in Global Healthcare class of 2015, and a graduate of the University at Buffalo, School of Management MINI (MBA). He is on the Board of Directors for NY Med Tech, and an NY Bio Fellow, along with being a member of many other industry organizations.