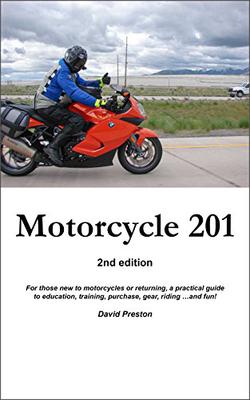 See more by David Preston
Get it now

David Preston has been fascinated by motorcycles since he was given a ride at the age of fifteen, well over years 50 ago. After a first career as an English teacher he moved on to a position he created involving motorcycle dealership media, events management, advertising, customer relationships, rides, trips, events announcing, and the creation of newsletters, e-mails, and technical papers. He also hosted a call-in radio show on motorsports topics for three years. David retired for the second time in the late fall of 2013, allowing time for more writing.

For the past five decades he has published essays, stories, and even poetry in both car and motorcycle magazines. After retiring from education and entering the field of motorsports full time, he published Motorcycle 101, a common sense guide to motorcycling now out of print. Motorcycle 201 is an updated and improved version now available as one of his many books available as Kindle or other e-reader downloads from Amazon.com. Most are also available in paperback form. Mourning Ride was his first published novel, and has evolved into the series of “Harrison Thomas” novels. Identity Ride is the second of those, and Triathlon Ride the third. Farrier Ride is the fourth, and Victim Ride the fifth, due out in 2020. Heart, Theory, and Practice is a collection of motorcycle and car-based essays and No Corner Left Unturned is a second collection of essays on motorcycle and automotive topics, as well as other random items of interest. Last, but first, Marcia, Marsha, Marczia is a teen lit romance and adventure novel set in the late 1980’s and written a few years later.
His web site is at www.davidpreston.biz and contains essays, thoughts, and screeds on any topic he wants to write about.

He lives in the suburbs of Seattle with a mostly blind cat, and hopes you enjoy this book, that you purchase his other books, that you recommend all of them to all of your friends, and that you will write a terrific review of each for the Amazon.com site!

All which will urge the speedy completion of more Harrison Thomas novels.