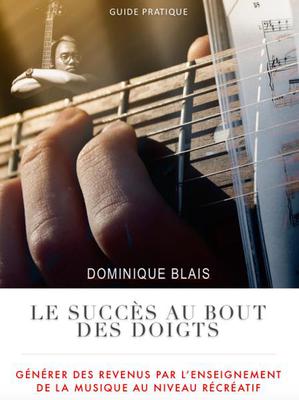 See more by Dominique Blais
Get it now

My name is Dominique Blais and I am a professional music business educator, business consultant, and entrepreneur.

Music has been a great part of my life from a very young age, and became my infatuation when I launched my own music company at the age of 16. Always an inquiring mind with a hungry heart, I combined my musical studies at Berklee College of Music with Paralegal and Human Resource Management studies, which proved to be a precious asset to my career.

Being enthusiastically involved in more than 50 recording projects in both Canada and the United States, I also had the pleasure to produce and mix some albums at Steve Vai’s home studio in Hollywood, CA. Several albums that I promoted were nominated at the Canadian Country Music Awards and the East Coast Music Awards.

Moreover, I served as a concert promoter in shows and tours for many artists such as, among others, Motorhead, Vince Neil (lead vocalist of heavy metal band Mötley Crüe), the Misfits, Anthrax, Marky Ramone, and SkidRow.

From 2003 to 2008 I was a Member services and Licensing Agent for SODRAC, a copyright management society for creators of musical works, including authors, composers and music publishers.

In 2008, determined to be constantly energetic in the arts, I founded the Marseille Music School in Montreal, a notably dynamic school offering its students a series of diverse projects together with its music and singing courses.

My career as a music business educator started at Trebas Institute in Montreal back in 2003. I currently hold the position of Director of Studies.