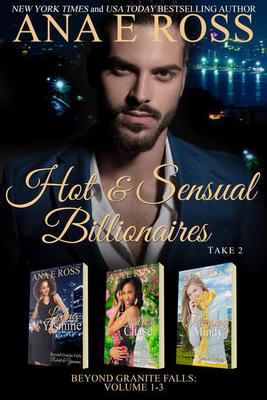 See more by Ana E Ross
Get it now

New York Times and USA Today Bestselling Author, Ana E Ross, was born and raised on the Caribbean island of Nevis where she began indulging in romance novels at a very early age—so much so that by the time she was sixteen, she’d read every Harlequin, Silhouette, Mills & Boon, Regency, and Historical Romance novel in the library on her native island.

After moving to the United States, Ana worked as a private ESL, tutor and taught middle and high school Writing and Literature for thirteen years before resigning from the classroom in 2013 to follow her dream of writing fulltime.

She is currently at work on a spin-off series—Beyond Granite Falls—featuring secondary characters from her Billionaire Brides series. The first book, Loving Yasmine will be released in December 2015. Books 2 and 3, Desire’s Chase, and Pleasing Mindy, will be released in 2016.

Ana lives in the northeast, and loves traveling, tennis, yoga, meditation, everything Italian, and spending valuable time with her daughter.

Connect with Ana at: http://www.anaeross.com