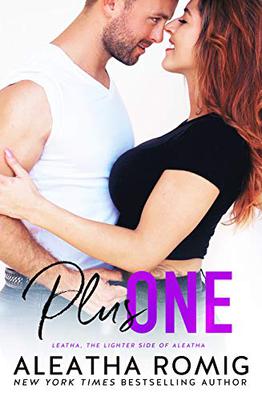 Plus One: Fake date, office romance

Aleatha Romig is a New York Times and USA Today best selling author, who has been voted #1 "New Author to Read" on Goodreads July 2012 - Present!

Aleatha has lived most of her life in Indiana growing-up in Mishawaka, graduating from Indiana University, and currently living south of Indianapolis. Together with her high-school sweetheart and husband of twenty six years, they've raised three children. Before she became a full-time author, she worked days as a dental hygienist and spent her nights writing. Now, when she’s not imagining mind-blowing twists and turns, she likes to spend her time with her family and friends. Her pastimes include exercising, reading and creating heros/ anti-heros who haunt your dreams!

Aleatha enjoys traveling, especially when there is a beach involved. In 2011 she had the opportunity to visit Sydney, Australia to visit her daughter studying at the University of Wollongong. Her dream is to travel to places in her novels and around the world.

CONSEQUENCES, her first novel, was released August 2011 by Xlibris Publishing. October 2012 Ms. Romig rereleased CONSEQUENCES as an Indie author. TRUTH, the sequel, was released October 30, 2012 and CONVICTED, the final installment of the Consequences Series, was released in October 8, 2013!

Aleatha is a “Published Author’s Network” member of the Romance Writers of America and represented by Danielle Egan-Miller of Brown and Miller Literary Associates.