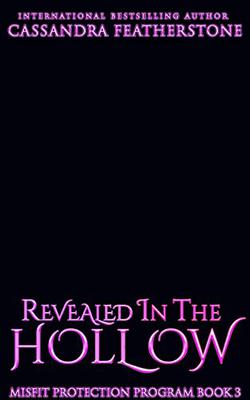 Revealed in the Hollow: A Steamy Paranormal/Humorous/Shifter Romance

See more by Cassandra Featherstone
Get it now

Cassandra Featherstone has been writing since she could hold a pencil.

She wrote her first story about a girl picking strawberries when she was three and has been creating worlds in her head ever since. After winning multiple awards for essays, poems, short stories and a very cheesy academy romance novel in high school, they selected her to attend the prestigious Governors School for the Arts in high school.

Her love of the arts is vast: she plays three instruments and marched flute/piccolo for six years), took ten years of tap/jazz/ballet/tumbling, and sang/acted major roles in many musicals and plays. She auditioned for a slew of colleges, but selected NYU for musical theater and lived in NYC for several years while she was in the studio.

After meeting her husband, she moved back to the Midwest and eventually spawned her mini-me, affectionately known as the goblin.

She has worked in many industries, from banking to retail management and, most recently, a decade in multiple positions at an indie bookstore until COVID-19 permanently closed her educational services department.

Cassandra is passionate about literacy, but when she picked up her laptop to write her first published novel in March 2020, she focused on subjects that not only spoke to her soul, but affected many of the women she’d met throughout her twisty life path.

Bullying, PTSD, body dysmorphia, mental illness, reinvention, and claiming your space are frequent themes in her books, as well as respectful, non-fetishized representation of LGBTQIA+ relationships. Her expansion of the reverse harem genre to include various types of polycules and diverse characters with three-dimensional personalities, hopes, and dreams was less common when she first published, but to her delight, becoming a standard reader request in the current atmosphere.

Because of her personal experiences in middle and high school, Cassandra is a staunch defender of those who get targeted by those with actual or perceived power that attack those who don’t.

She’s also affectionately known as the Muppet for her outrageous, extroverted personality and her wacky brand of theater kid social media posts and videos.