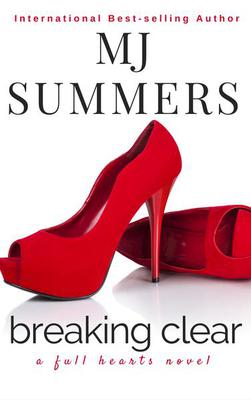 See more by MJ Summers
Get it now

MJ Summers made a name for herself with her debut novel, Break in Two. The highly acclaimed novel has received over 2300 reviews on Amazon.com maintaining a 4.4 Star rating. Released on Nov. 6, 2013, the novel quickly climbed to the number 2 position in the Top 100 Paid Kindle Store in Canada. It sat at number 1 in Western Romance on Amazon in Canada, the UK, and the USA for several weeks.

She is now working with super-agent, Suzanne Brandreth, of the Cooke Agency, who has sold the English language rights for MJ's four-book Full Hearts Series to Piatkus Entice (a division of Hachette UK) for all territories outside North America, and to HarperCollins Canada. Her first two novels have been translated in Czech and Slovak by EuroMedia.

Her novella, Don't Let Go, released in July 2014, hit the Top 100 in Western Romance as well as the Top 100 in Kindle Short Reads within the first twelve hours of sales.

MJ Summers currently resides in Edmonton, Canada, with her husband, three young children and their goofy dog. When she’s not writing romance novels, she loves reading (obviously), snuggling up on the couch with her family for movie night (which would not be complete without lots of popcorn and milkshakes), hiking, and yoga (to make up for the milkshakes), and camping (with lots of gooey s’mores and hard ciders). She also loves shutting down restaurants once a month with her girlfriends. Well, not literally shutting them down, like calling the health inspector or something. More like just staying until they shut the lights off.

MJ is a proud member of the Romance Writers of America.