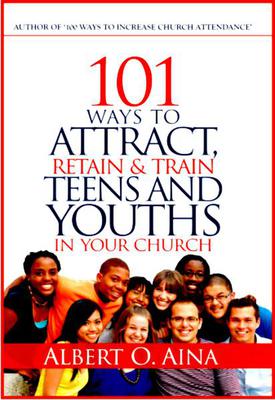 101 Ways To Attract, Retain And Train Teens And Youths In Your Church

See more by Albert O. Aina
Get it now

EDUCATION TRAINING Young Albert started his education at St. James Cathedral Primary School, Ibadan (1969 – 1973), his Secondary School education in Fakunle Major Commercial College, Oshogbo, Osun State, as well as United Secondary School Odo-Ere Kogi and graduated with Distinction in WASC 1979. He graduated from University of Nigeria Nsukka with B.sc Hons Management Studies in 1983. He was Student Editor in chief of Departmental Magazines of Business Administrator while on campus.
He is a full member of the following professional bodies: 1. Chartered Institute of Personnel Management 2. Nigerian Institute of Management 3. Nigerian Institute of Training and Development
He holds a BA/BTH of LIFE THEOLOGICAL SEMINARY Ikorodu (1994 – 1997) and attended other Bible Institutes.

PROFESSIONAL CAREER Albert Aina started his career after his National Youth Service, as a Management Consultant, Investment Advisor and Trade Exhibition Planner, before joining the Industrial Sector. He rose to become Group Personnel/Training Manager over a group of companies at age 28.
By the age of 29, he became CEO/Managing Director of Alaryn Management Center Ltd with clientele that cut across industrial and banking sectors. He served as Secretary to the Committee of Personnel Experts of Nigerian Employers Consultative Association (NECA) and was involved in major Nation wide Industrial Labour Dispute Resolutions and Negotiations and labour arbitration. He served as Secretary of Sectorial units of Manufacturer Association of Nigeria, Ikeja Branch.
He become CEO of Christian Leadership Skills Inc in 1994, as a vehicle for his three fold Divine Mandate.

REBIRTH AND MEMBERSHIP OF FOURSQUARE GOSPEL CHURCH Albert Aina accepted Jesus as LORD and Saviour in November 1981 as a teenager in University of Nigeria Nsukka. He served as Ass. Sec./Liberian of Students Christian Movement (SCM) while on campus, where he was filled with the Holy Spirit. He joined the Foursquare Gospel Church Shomolu in 1985 and was accepted into membership in March 1986 by Daddy Elikanah Olu Oshibanjo.

REV (MRS.) OMOLARA ATINUKE AINA – HIS BETTER HALF Rev. Aina got married to his hearthrob, Omolara Atinuke Aina (Nee Kolawole) at the Foursquare Gospel Church Shomolu and their marriage is blessed.
Omolara Atinuke Aina got born again in 1978 in her FORM TWO in Secondary School. She attended Ikeja Grammar School, as well as Lagos State Polytechnic. She graduated from University of Illorin in 1989 with B.Sc Ed Mathematics. She holds Masters degree in Education Administration from University of Lagos (2002). She is a member of Nigerian Institute of Management. She holds a BA./BTH (1994-1997) from LIFE Theological Seminary Ikorodu and other Bible Institutes. She was ordained in 2001.
Rev. Mrs. Omolara Aina has been an astute Teacher, professional Educational Administrator, Guidance counselor, a passionate Mathematics teacher and examiner at secondary school and tertiary institution for over two decades. She had a stint as Mathematics lecturer at Federal College of Education. She is Assistant Director of Education with Lagos State Teaching Commission.