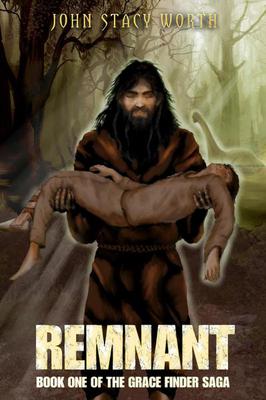 See more by John Stacy Worth
Get it now

Though John Stacy Worth may write from a Christian world view, as he once told his wife, “ ...This ain't your Mama's Christian Fiction.”

His books have no Amish folks (cool as they are), no 1800s Western setting with a focus on romance (and Western Romances do indeed rule). His fiction is more like, “Did you ever wonder what a Behemoth was, and how you might kill one?” Or, more importantly, "What's Leviathan taste like?"

And such crucial questions as, "Can a vampire get saved? What were the Nephilim really like? What happened to those Cherubim and that flaming sword guarding the entrance to Eden?" And, "If you could travel through time to witness the crucifixion and resurrection what would you tell the disciples?"

John Stacy Worth has been writing and illustrating stories like these since he was old enough to trace comic books. He grew up in rural Georgia, reading every Tarzan novel he could get his hands on, then moved on to Asimov, Tolkien, Orson Scott Card ... you get the picture.

Since those days (way back in the twentieth century) it's rumored he served in the U.S. Navy (14 countries and, some say, about every island in the Caribbean), spent a year undercover as a High School Science Teacher, then a Chemist for Merck Pharmaceuticals, and (according to certain sources) he's now at a Nuclear Power Plant.

What's known for sure is that he's happily married, somewhere back in Georgia, with two awesome sons. He still likes to draw and make up stories, loves God, and talks about Jesus if you give him half a chance.

His books are just beginning to show up online. And hey, if your mama is that rare and precious type that occasionally wonders "What's up with Nessie?" or "You know, I believe that Bigfoot critter might be real...", send her his way. This might be your Mama's Christian Fiction after all.

P.s. And if would be so kind, once you or your mama finish reading one of his strange and wondrous tales, would you consider leaving an honest review? This lets others know that his fiction is indeed worth reading, and allows him to participate in promos requiring a certain number of reviews. Not only that, it's said this also makes him smile, raise his hands in thanks to Heaven, and opens his heart to receive fresh revelation for another tale.