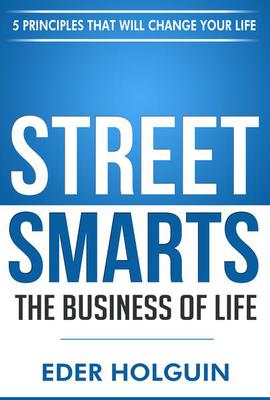 Street Smarts The Business of Life: 5 Principles That Will Change Your Life

See more by Eder Holguin
Get it now

Eder Holguin's story was not always a success story. Born in Medellin, Colombia, he spent years as a young teen living on the streets, selling household goods door-to-door in order to eat and pay his way through school. A natural salesman and imaginative promoter, Holguin learned the secrets and psychology of marketing on the most fundamental level ?? face to face with the customer.

By the time he was 16, Holguin had borrowed seed money, hired his own sales team, and had launched a low-budget direct-sales operation. At night, he took high school courses, and spent his spare hours at the local library. Over the next few years, with his fortunes slowly rising, Holguin acquired a business management degree from a local university, graduating near the top of his class.

Eventually, he was able to work his way from Colombia to the U.S., landing in high-velocity New York City with little money and just a few phone numbers. "Sure, it was intimidating to a newcomer, but I was computer oriented and knew I could find a way to transfer my sales and marketing skills to the online media space. It didn't happen overnight, that's for sure, but I had another handy skill: sheer determination."

Never forgetting his own humble roots, Eder Holguin has reached out to help others who are unable to help themselves. For example, he is a member of the New York marketing and organizing committee for 'El Banquete del Millon', an important charity fundraiser held annually in various cities around the world. Sponsored by the El Minuto de Dios Corporation, the international event generates millions for homeless families in Colombia. "We help feed the poor, build affordable housing, and provide educational opportunities. It offers hope for a better life to those who might otherwise have no hope at all."

Reaching out on another front, Eder Holguin is in the process of establishing a foundation dedicated to rescuing street children in Colombia. "I was once a homeless kid in Medellin and understand what needs to be done to make a positive, permanent difference in young lives. For obvious reasons, the foundation is close to my heart and I plan to have it up and running within the next year."