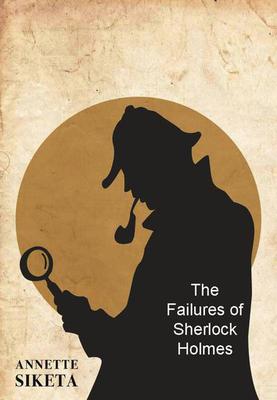 The Failures of Sherlock Holmes

See more by Annette Siketa
Get it now

I wish I had a dollar, a peso, or a pound, for every person who has asked me, "How does a blind person write a book?"

The answer is, 'Very bloomin' carefully'.

Seriously though, it's not as difficult as you may think.  Perhaps the following article might explain it - and I make no apologies for boasting!

Picture this – a searing Australian summer, roads melting, birds dropping out of trees, an over excited thirty-six year old daughter, and me – her mum, trying to keep cool in every respect.  And the reason for said daughter’s excitement?  A private meeting with David Duchovny. David was on a whirlwind concert tour of Australia and New Zealand.  Yes, he sings!  Unfortunately, the reviews out of NZ were less than complimentary.  But, it didn’t matter to Boos, (said daughter’s nickname.)  David could have sung like Donald Duck and she wouldn’t have cared.  She had been an X-Files fan since the first episode, and whilst she has met Gillian Anderson several times, she had never met David.  Now, after a twenty-two year wait, he was literally at her fingertips. We thought it would be nice to give him a gift from Oz.  But, what do you give a television legend?  In my case the answer was simple – copies of some of my books.  This was perhaps a little pretentious, but it was better than some touristy stuffed kangaroo or fluffy koala – both made in China. But there was a hitch.  One of the said books was not due to be released for another month.  Fortunately, a grovelling phone call to my publisher secured a proof copy.
The big day duly arrived, and considering he was about to go on stage, Mr D was very generous with his time.  Poor Boos.  She was so awe-struck and tongue-tied that she could barely tell him her name.  Mama to the rescue!  I presented David with my books, and he was fascinated as to how I had carved out a career as an author.  You see, I am totally blind. So, how do I do it?  On the practical side, I use a text-to-speech program called ‘Jaws’, which enables me to use a computer, including navigating the Internet, with considerable ease.  Information on Jaws can be found at www.freedomscientific.com  Being accustomed to the program’s electronic voice, I have no difficulty understanding what it says.  Others however, can’t understand a single word.  Nor is the program infallible.  By design, it reads whatever is on the reen.  Regrettably, in the case of web pages, this includes all the annoying adverts.  Speaking of ads, I made the following point to Mr D.  “Companies spend millions on advertising – the super bowl being a prime example, and yet if the ad only consists of music or doesn’t actually name the product, then all that money is lost on blind and visually impaired people.” Nor can Jaws interpret graphics.  For example, it won’t announce, “This is a picture of a girl about to be executed with an axe,” or, “The man in the silver spacesuit is about to fire a ray gun at a green entity with nine appendages.”  Instead, it only says the specifications as defined by the webpage’s encoding.  “Ray death.jpg  150 by 250 pixels.”  Pretty boring, eh? And yet when it comes to writing, Jaws does give me one huge advantage, namely, cadence.  Just as a song has melody and lilt, so should a sentence ‘sing’.  For example, “It can’t be done,” is smooth and even, but if you change it to, “It cannot be done,” the cadence is broken because the word ‘cannot’ contains a syllable, thus rendering the rhythm of the sentence uneven. And now for the creative side, which is a little more difficult to explain.  Try this experiment.  Put on your favourite movie and watch it blindfolded.  As you already ‘know’ the movie – who does what, where, & when etc, your mind compensates for the lack of visualisation by filling in the ‘blanks’.  Now try it with something you’ve never seen before such as the six o'clock news.  Not so easy to fill in the blanks now, is it? You’re probably going bonkers with frustration.  Heh heh – welcome to my world!  But, do not remove the blindfold.  Instead, give your imagination free reign and create the people or characters in your head – the faces, the clothing, the injuries, anything they might be holding or consuming.  Does the person/people look sad, happy, elated, worried, concerned, angry?  Is the hair black, brown, green, pink, blue, purple?  Do they have one, two, or three eyes?  Are they standing in an office, a medieval banqueting hall, or on top of a plasma bomb that’s about to explode? As I said to Mr D, “Sometimes the episodes were so bizarre that I had to ask Boos to explain it to me.” “I’m not surprised,” said he.  “Even I didn’t understand them sometimes.” There are points of reference of course.  I mean, the design of the Brooklyn Bridge or the Eiffel Tower is never likely to change.  But, if you place the tower in a futuristic setting, (think Planet of the Apes), then this should give you an idea of how I create scenes and stories.  In effect, I construct a sort of movie in my head and then write it all down.  Oh if only Steven Spielberg could read my mind! One final point.  Touch is very important to a blind person.  It is usually the only method for discerning the shape of an object.  Without sounding fanciful, we literally ‘see’ through our fingers, and the same premise applies to faces. Mr D did not hesitate when I asked if I could ‘feel his face’, and photos of it later appeared on his official website.  I dare not repeat the comments he made, but I’ll tell you this much, they were very un-Mulder like! I wish there was room to give you a full report.  I did write one, but it was only for the benefit of Boos.  You see, by the following morning, she could hardly remember anything about the meeting.  I however, have it locked in my memory forever. Add an Author Biography