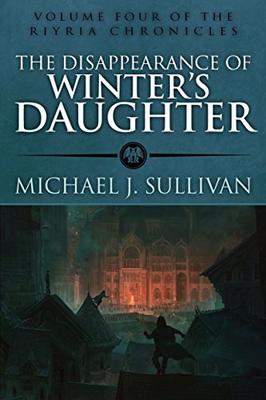 The Disappearance of Winter's Daughter

See more by Michael J. Sullivan
Get it now

Michael J. Sullivan is a three-time New York Times, USA Today, and Washington Post bestselling author who has been nominated for nine Goodreads Choice Awards. His first novel, The Crown Conspiracy, was released by Aspirations Media Inc. in October 2008. From 2009 through 2010, he self-published the next five of the six books of The Riyria Revelations, which were later sold and re-released by Hachette Book Group’s Orbit imprint as three two-book omnibus editions: Theft of Swords, Rise of Empire, and Heir of Novron.

Michael’s Riyria Chronicles series (a prequel to Riyria Revelations) has been both traditionally and self-published. The first two books were released by Orbit, and the next two by his own imprint, Riyria Enterprises. A fifth Riyria Chronicle, titled Drumindor, will be self-published in the near future.

For Penguin Random House’s Del Rey imprint, Michael has published the first three books of The Legends of the First Empire: Age of Myth, Age of Swords, and Age of War. Grim Oak Press distributes the last three books of the series: Age of Legend, Age of Death, and Age of Empyre.

Michael has returned to purely self-publishing roots with the release of his most recent series, The Rise and Fall Trilogy. These books are being published in the current schedule: Nolyn (Summer 2021), Farilane (Summer 2022,  and Esrahaddon (Summer 2023).

Michael is now writing Drumindor, the fifth book of The Riyria Chronicles. This will return him to the timeline of Royce and Hadrian, two rogues he hasn’t visited with since the release of The Disappearance of Winter’s Daughter in 2018.

You can email Michael at michael@michael-j-sullivan.com.