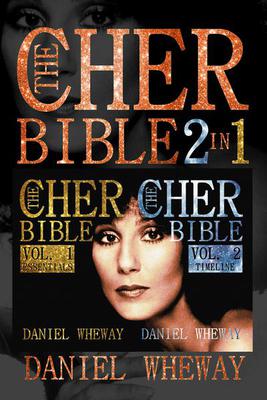 See more by Daniel Wheway
Get it now

Daniel Wheway was born in England, 1991, and grew up with a keen interest in music much older than himself, especially that of legendary American artists such as Elvis Presley, Cher, Michael Jackson, Meat Loaf, Deborah Harry and Tina Turner.

He created several blogs and websites dedicated to music, with the most popular being 'Cher News', for which he wrote over 500 original articles, attracting 2,000,000 views. He produced 'The Cher Bible', a small series of books consisting of a collection of interesting ideas about Cher. 'Vol. 1: Essentials' and 'Vol. 2: Timeline' have been released.

"I have been a Cher fan since the mid-1990's, when I was about six years old. My father was watching 'Extravaganza — Live At The Mirage'. As soon as I saw Cher performing 'We All Sleep Alone', I was hooked." — The Cher bible, Vol. 1: Essentials

Daniel has already released music guides on Blondie & Deborah Harry, Wham!, Dead Or Alive & Pete Burns and Sonny & Cher — primarily consisting of biographies, discographies and filmographies. His most recent one is of Meat Loaf.

"My major fandom came when Atomic was used on the soundtrack of 'Grand Theft Auto: Vice City', the video game. I must have only been around thirteen years old. But to me, that song was, and is, phenomenal." — The Essential Guide To Blondie & Deborah Harry

The Cher Bible, Vol. 1: Essentials: "★★★★★ I have always considered myself a super fan of the Goddess of Pop, Cher. Not until I picked up this e-book did I realize I still had so much more to learn." — Caleb W., Amazon

The Cher Bible, Vol. 1: Essentials: "★★★★★ I was really surprised how much I learned about Cher! And I thought I knew just about everything!" — Pete H., Kobo

The Cher Bible, Vol. 2: Timeline: "★★★★ It's always great to catch up and remember a great American story. Cher is that story." — Michael C. Moser, Amazon

The Essential Guide To Blondie & Deborah Harry: "★★★★★ Great Insightful book here by Daniel Wheway... He has really researched his facts and figures to give a good all round view of Blondie and Deborah Harry's career... He lists all known releases and gives info on set lists from different tours (which I found fascinating)... It's very easy to read and easy to follow." — Amazon customer

The Essential Guide To Blondie & Deborah Harry: "★★★★ As a longtime Blondie fan, I was really looking forward to reading this book -- I don't think there are any other books available about the music of Blondie and it's members. It is very factual and provides much information about releases, very thorough and detailed, in chronological order. I was pleasantly surprised at how much I learned, and Debbie Harry's filmography being included -- a definite plus." — RonnieLava, Amazon

The Wham! Guide: "★★★★ Book letting us know what songs they made, and when, and after Wham! broke up, it talks about George's career. and the songs he wrote and sang." — lyndajean23, Amazon

The Cher Bible, Vol. 1: Essentials 2018 Edition: "★★★★★ ...Everything you could possibly want from a Cher book. I have been a Cher fan since the sixties, and this book covers everything from then until now! Everything is mentioned! Absolutely recommend it. Brilliant work." — OGCherFan, Kobo

The Elvis Presley Song Guide: "★★★★★ Nice little book for any Elvis fan or discerning music fan that wants to knoe where to find a particular song by the King or who wrote it." — David Gibbs, Amazon

The Elvis Presley Song Guide: "★★★★★ Handy little reference book which gives each song title in alphabetical order, who wrote it, the year it was released and which album it made it's debut on. Little "non-songs" are on the list too such as Hank Williams' 'Men with broken hearts', which was only a verse spoken by Elvis." — TOPPS, Amazon

Take A Look At Me Now: The Phil Collins Fact Book: "★★★★ Great book about my favourite artist." — Gone4ABurton, Amazon