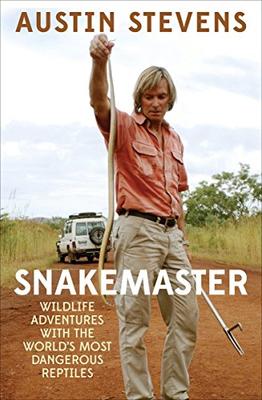 Snakemaster: Wildlife Adventures with the World's Most Dangerous Reptiles

See more by Austin Stevens
Get it now

Austin James Stevens was born, raised and educated in Pretoria, South Africa. Austin’s interest in wildlife began at the age of 12, and by 16 he had already gained extensive experience and knowledge in the field of herpetology, which included the keeping of a private collection of both venomous and non-venomous reptiles.

Upon leaving Pretoria Boys High School, Austin was immediately recruited into the South African Defence Force by compulsory draft. Austin’s natural aptitude for capturing and relocating venomous snakes was put to good use in the then active Angolan war military zone, where he found himself often called upon to catch and remove snakes from tents, latrines, trenches, and observation posts. It was during one such incident that Austin sustained a serious venomous bite from a puff adder, which required his immediate evacuation, first by vehicle across hundreds of kilometres of Angolan bushveld, and a further eight hundred kilometres by Cessna spotter plane to Windhoek Hospital in South West Africa (now Namibia) where after arriving in a semi-comatose state, doctors fought to save his life, and his hand.

It was not long before Austin’s affinity with snakes attracted the attention of the Transvaal Snake Park in South Africa, where he was offered a position as Assistant Curator, which required him to oversee the care and husbandry of hundreds of reptiles, as well as to present lectures and perform public demonstrations. During this time Austin made his first television appearances when asked to present three television shows concerning reptiles of the world, live in studio.

After leaving Transvaal Snake Park, Austin traveled to Germany to help design, build and instigate operation of a privately-owned reptile park in the Northern Harz region of Germany. After the institute became operational, Austin returned to South Africa, undertaking several trips to Germany over the following years to visit and work at the park.

Sometime thereafter Austin commenced work as Curator of Reptiles at the largest privately-owned reptile and animal facility in Southern Africa, the Hartbeespoort Dam Snake and Animal Park. It was during this period that Austin established a Guinness World Record snake ‘sit-in’ for living in a three metre by four metre glass cage, with 36 of Africa’s most venomous snakes, including black mambas, for a period of 107 days and nights. He accomplished this amazing feat to raise awareness to the plight of the endangered African gorillas, and to help procure a breeding female companion for the parks only male lowland gorilla, Kaiser. The details of this record were published in the Guinness Book of Animal Records. The specifications and conditions of this record have never been duplicated or broken.

After resigning his employ at the Hartbeespoort Dam Snake and Animal Park, Austin relocated from South Africa to Namibia. Drawn by its unusual specialised desert-adapted wildlife and vast open spaces, this was the perfect location for Austin’s latest interests in writing and wildlife photography. Over the years that followed, over one hundred of Austin’s wildlife articles were published in magazines around the world, all accompanied by his own photography.

In 1992, Austin’s first book, Snakes in My Bed, a hilarious compilation of Austin’s adventures as a herpetologist in Germany as well as in South Africa, was published by Penguin Books.

After working with several wildlife filmmakers on various animal projects, Austin acquired his own 16mm film equipment and after 14 months in the field, produced his first documentary film, exposing the unusual behaviour of interesting snake species found in Southern Africa. Die Natur der Schlange (The Nature of the Snake) was released for NDR Television in Germany in 1998, and was nominated for a FRAPNA award at the 14th Grenoble International Film Festival of Nature and Environment, in France.

Later, after spending some eight months in near isolation in the desolate sand dunes of the Namib Desert, Austin video-filmed, Dragons of the Namib, a story concerning the lives of the little known desert chameleons of Namibia. Aired by National Geographic, the film has proved to be extremely popular and remains still today well received around the world.

Shortly after launching Dragons of the Namib, in March of 2001, Austin was approached by Tigress Productions in Bristol, UK, to help design, co-ordinate, and present a film which was to be entitled, Seven Deadly Strikes. The film took Austin and his film crew from one side of the Southern African continent to the other, in search of Africa’s most dangerous snakes.

The success of Seven Deadly Strikes attracted the attention of Animal Planet USA, and after commissioning two further shows, eventually set in motion a 13-part television series that Austin would present. He requested that Tigress Productions act as his film crew and producers, and the series was shot between 2002 and 2005. The series entitled Austin Stevens Snakemaster, in USA, and presented in other countries around the world as, Austin Stevens Most Dangerous, and Austin Stevens Adventures, took him across the globe in search of the deadliest, the largest, and the most beautiful reptiles on the planet.

Once this first series was completed, Austin returned to writing and wildlife photography. In May 2007, he released his second book, entitled The Last Snakeman. This semi-autobiographical large-format picture book is filled with Austin’s own wildlife photography and describes some of his many adventures with wildlife and the realities of wildlife conservation today.

In August 2007 Austin began filming his second 12-part television series, Austin Stevens Adventures 2, in collaboration with Cineflix Canada, UK’s Channel 5, Tigress Productions and Discovery Channel. The series launched Austin on another bout of world travel in search of unusual wild animal behaviour. The series encompassed heart-stopping encounters with wildlife and took viewers to some of the most spectacular places on the planet. Work on the series was completed in October 2009. Austin received a nomination for 'Best Host or Interviewer in a General/Human Interest Series' for the 'In Search of Armoured Giants' episode of his series 'Austin Stevens Adventures 2.' This series also received a nomination for 'Best General/Human Interest Series.

In 2013, Austin was approached by a New York Publisher to compile a book specifically designed around his adventures with snakes, for the USA market. This resulted in the launch of Austin’s third book, Snakemaster (2014) which highlights some of his more hazardous behind-the-scenes scenarios, mishaps and collection of adventure experiences pertaining to his work with dangerous reptiles, on camera and off. Snakemaster is to be re-released in paperback in 2019.

In March 2018 Austin’s latest hard-copy manuscript, Running Wild, was launched in the UK by Austin Macauley Publishers. A more diverse work spanning some 40 years of experiences and adventures in the field of wildlife, Running Wild, for the first time, reveals some of Austin’s most personal misadventures. Having faced adversity and mortality more than once, Austin shares his reminiscences of past experiences and close encounters from terrorist ambush, cerebral malaria, car smash, and brutal knife attack, while living in a country infused with insecurity, war and isolation, and his desperate struggle to rebuild a shattered life.

After a lengthy period of observation, Austin was officially diagnosed with Parkinson’s disease. Accepting that his life was about to experience a momentous change of pace as the progressive disease negatively influenced his adventurous lifestyle, Austin once again took to writing, and released his first e-book in September 2018, Snakes Have Right of Way, which is a revised and encapsulated work compiled from the original manuscript, Snakes in My Bed. Austin offered this e-book FREE to the public especially for those readers who expressed interest in obtaining the original book, Snakes in My Bed, which is out of print.

In November 2018, Austin launched his second e-book, These Germans Drive Me Crazy, a sequel to Snakes Have Right of Way, which describes his time spent in Germany where he assisted in the design and establishment of a privately-owned reptile park in the northern Harz mountain region.  Floundering his way through the multitude of problems he faced throughout this initial period in Germany, not yet able to speak the language or fully comprehend the culture, These Germans Drive Me Crazy is the hilarious account of Austin’s adventures and mishaps managing the reptile park as he strived to adapt to the eccentric and risky escapades thrust upon him by the owner, the incorrigible Fritz Klingman.

Austin is currently working on his next book. He and his wife, Amy, are presently settled in Queensland, Australia.