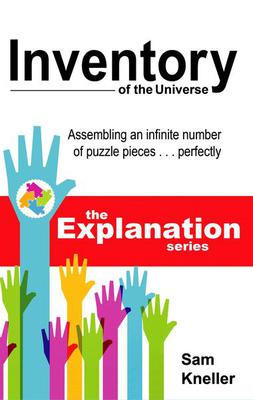 Inventory of the Universe

See more by Sam Kneller
Get it now

Sam started learning Hebrew at the age of 10. Little did he know how that would serve him half a century later. At the age of 20, a statement challenged him: You can prove God exists. He found the answer, not in proofs, but as evidence from the Bible. In a simple but profound way, he saw that there was more to the Bible than what any single or group of authors could pen. His fascination with the Bible story and its Authorship has continued, unabated.

As his Ministry in France progressed, he began to refer more and more to the Biblical Hebrew. He realized there was additional information that is not translated into the almost word-for-word native-language translations. For instance, he began to see that some Hebrew words can have double, even opposite meanings. As an example, the word translated breath can be to give or take life. Sometimes breath (ruach), translated blast, refers to its destructive powers. You cannot see this in English or any other language.

The outcome has been the 7 Keys to Master Biblical Hebrew, a Study Method to Unlock Bible Meaning. He developed online Bible tools so anyone can do their independent study and verification of the explanations he proposes. He encourages you to check what he suggests. There’s free access to an online King James Version of the Bible, Strong’s Concordance, Interlinear Bible and Hebrew-Greek Concordance.

Origin of the Universe, a commentary of Genesis 1, will be followed by the next chapters of Genesis. Each week Sam adds a section online at TheExplanation.com. He’s completed Genesis 2. Now comes the in-depth meaning of the subtil serpent in Genesis 3. There is so much in the Biblical Hebrew that you cannot grasp in any other language.

He continues to be captivated, more than ever, with the Bible narrative. This e-book, and the rest of his works, are his desire to share this foundational knowledge with readers. May you learn and have a better understanding of the Word of God.