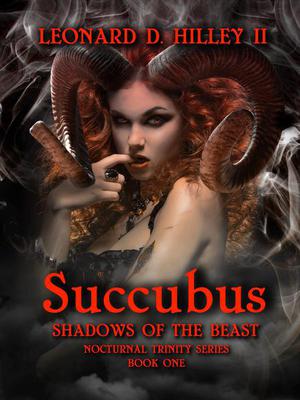 Succubus: Shadows of the Beast

See more by Leonard D. Hilley II
Get it now

Leonard D. Hilley II grew up a quiet, shy kid with an inquisitive mind. Learning to read at an early age, he fell in love with books. He read every book he could get his hands on and stacks of dark comics about ghosts, monsters, and creepy things that stalk the night.

Like a lot of boys, he caught beetles, wooly bears, butterflies, and had an ant farm. When he was ten, his interests in science increased even more after seeing a professor's insect collection. Soon he set out on his quest to build his own collection. He also learned to rear butterflies and moths to obtain perfect specimens. He learned botany, gardening, and set his goal to become an entomologist.

At eleven, he saw Star Wars at a VIP viewing room in the cinema. His imagination soared. Soon after, he discovered Roger Zelazny's Chronicles of Amber. Six months later he had written the first draft of a novel. A novel he later discarded, but the characters stuck with him. Years later, these characters came to life in Shawndirea, which Hilley had intended to be a novella for Devils Den. The characters, however, refused to be ignored and took the opportunity to unveil Aetheaon in their first epic fantasy. Lady Squire: Dawn's Ascension was quick to follow.

Shawndirea was Hilley's farewell to butterfly collecting, and those who have read the novel understand why. He has taken Ray Bradbury's advice to heart: "Follow the characters." He does. He follows, listens, and take notes--often never knowing where they're going to take him, but he's never been disappointed in the results.


Hilley earned a B.S. Biology and an MFA in Creative Writing to combine his love of science and writing.

Sci-fi Titles: Predators of Darkness: Aftermath, Beyond the Darkness, The Game of Pawns, Death's Valley, The Deimos Virus.