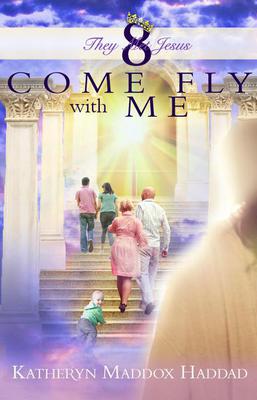 Come Fly With Me

See more by Katheryn Maddox Haddad
Get it now

Katheryn spends an average of 300 hours researching each of her historical novels with an average length of 450-600 pages. At the end of each novel are discussion questions for book clubs and classes.  "My novels both entertain and educate."  One reviewer after reading Paul: The Unstoppable said, "WOW!  OH WOW!"

The author of 66 books (so far), Katheryn grew up in the northern United States and now lives in Arizona where she doesn't have to shovel sunshine.  She basks in 100-degree weather with palm trees, cacti,  and a computer with most of the letters worn off.

​​​​​​​           Her newspaper column appeared for several years in newspapers in Texas and North Carolina ~ Little-Known Facts About the Bible ~ and she has written for numerous Christian publications.  For several years, she has been sending out every morning a daily scripture and short inspirational thought to some 30,000 people around the world.

She spends half her day writing, and the other half teaching English over the internet worldwide using the Bible as the textbook.  She has taught over 6000 Muslims, commenting, "If they want free lessons in English bad enough, they tolerate the Bible."  She has converted to Christianity former Muslims in hiding in Afghanistan, Iran, Iraq, Yemen, Uzbekistan, Jordan, Pakistan, Jordan, Sri Lanka, Kasikstan, and Palestine.  “They are my heroes,” she declares. "I dedicated my historical novel, Stephen: Unlikely Martyr, to today's courageous good-hearted former Muslims, Hindus, Communist Atheists and others who have become Christians at risk of their lives."

She is a member of Christian Writers of the West, American Christian Fiction Writers, and the Historical Novel Society.

Her monthly newsletter of updates is for the WHOLE FAMILY.  She handpicks 1 adult novel, 1 adult non-fiction, and 1 child's storybook to offer her subscribers for 99c each.  She also gives an interesting tidbit from history to delight her readers, along with a recipe from Bible lands and a craft associated with one of her featured books for the month.  Worth every bit of the FIVE MINUTES it takes to read.  Sign up at http://bit.ly/KatherynsUpdates

A DISCOUNT BOOKSTORE in Arkansas carries all Katheryn's paperback books below Amazon prices and also imprints your name on the front cover FREE.  And no sales tax!  http://www.biblehousesupply.com/


JUST WHAT IS A BIBLICAL HISTORICAL NOVEL?

It definitely is not adding to the Bible. That would be sacrilegious and disloyal to God who told us just exactly what he wanted us to know. I have too much respect for the Bible.

A biblical historical novel is a COMMENTARY IN NARRATIVE FORM.  I spend an average of 300 hours researching for each novel I write.

What I do is give A POSSIBLE PREVIOUS LIFE to the Bible character that might have caused him to do and say what the Bible says he did and said. All my novels begin in the character's youth, sometimes even their childhood. I sometimes go on to what their life might have been like after we meet them in the Bible.  Occasionally, I add what their attitudes may have been at their death as a result of their earlier encounter with God.

​​​​​​​          (By far the most difficult death scene I ever wrote was in Stephen: Unlikely Martyr and comprehending what Stephen's thoughts may have been as a young deacon, possibly 29 years old, leaving behind a wife and small children. I struggled with that and walked the floor for two days before writing it.)

1.  Yes, in some ways I play PSYCHOLOGIST. I try to convey how the character possibly grew spiritually through the years before the events we read of in the Bible.

2.  I also play SOCIOLOGIST. I research each city the character lived in or even traveled through, along with the ancient highways that existed then. I learn the languages spoken, the street layout (from archaeological digs), who the magistrates were then, how they dressed, what they ate, what form of transportation they used, what other religions were prevalent there, who the country's king was, what wars were they involved in at the time, etc.

3.  I play LINGUIST. As I study deeply into the Bible account, I look up major words in the original Hebrew or Greek. Translators do not have the luxury of doing more than giving a single English word. If they gave a phrase for each word translated, the Bible would be zillions of pages long and we'd have to carry it in a wheelbarrow. For example, when the Bible says the soldiers took Jesus up the hill of Golgotha, the word "took" in Greek is to carry like a bowl.

I try to both educate and entertain.