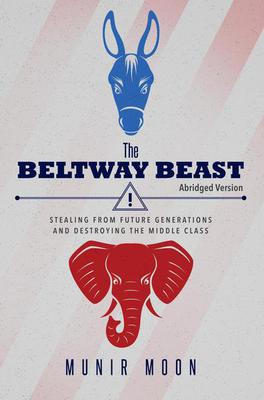 The Beltway Beast: Stealing from Future Generations and Destroying the Middle Class

See more by Munir Moon
Get it now

Munir Moon is a former financial industry executive, a successful small business owner and an author of three books. Moon spent eight years in the financial industry, starting at Chase Econometrics and ending at a savings and loan association during the 1980s. He was a firsthand observer of the financial crisis in the 1980s, which resulted in the demise of the savings and loan industry, to be repeated in 2008 in a different form. Having a son born with cancer who survived numerous surgeries, he has experienced the best and worst of American healthcare system. As a businessman, he appreciates the impact of over-regulations, taxes and globalization.

The recent book, Confessions of an Old Man: How Millennials are Being Robbed is a call to action for the MI generation (defined as those born between 1980 and 2018)—a generation with the most to lose if the United States continues with its current domestic and foreign policies. Baby boomers have much to answer for: a legacy of economic instability, poor job growth, and an environmental disregard. This book is a statement of collective guilt that places the responsibility on the author's generation for dealing a bad card to its children.

The first book, The Beltway Beast: Stealing from Future Generations and Destroying the Middle Class, was published in 2014. It transcends the anger and frustration of the American people caused by their leaders’ failure to solve the country’s problems. The book included warnings about cyber security and domestic terrorism by nationalist groups as the most serious economic and national security threats to the United States.

The Middle Class Comeback: Women, Millennials, and Technology Leading the Way, counters the negativity of the dominant narrative surrounding the past, the present, and most importantly, the future of the American middle class. It presents a hopeful blueprint for its revival, with women, millennials, and technology being major factors, while addressing the transformation of ever-rising health-care and education costs and taxes that adversely impact the middle class.

Moon earned his BS in engineering, MS in economics, and MBA in finance from UCLA. He is married with three sons and lives in Los Angeles County, California.