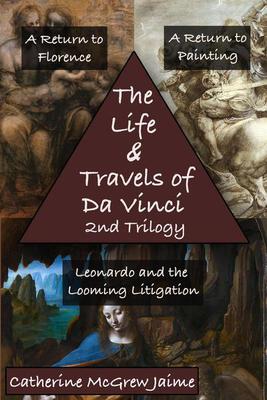 The Life and Travels of da Vinci 2nd Trilogy

See more by Catherine McGrew Jaime
Get it now

Catherine has a passion for writing, traveling, and history that spans decades. One topic she goes back to again and again is Leonardo da Vinci. After teaching her first classes about this incredible Renaissance man, she wrote her first non-fiction book about him, Da Vinci: His Life and His Legacy. His Life and His Legacy joined countless other non-fiction books she had already written, including, but certainly not limited to, An American Looks at Wuerzburg, Sharing Shakespeare with Students, and Stars Over Central America (her journal of a trip from the Panama Canal Zone across Central America when she was nine-years-old).

It would be many years later before she would try her hand at writing fiction, not surprisingly turning first to historical fiction. She started with one novel on her favorite topic, Leonardo the Florentine, showcasing some of his adventures as an apprentice and during his early years as an artist. That first novel is on its way to becoming the nine book series, The Life and Travels of Da Vinci.

Catherine’s first published short stories included The Attack in Cappadocia, The Attack at Shkodra, and The Attack on Wuerzburg – all historical fiction, of course, and all available individually, or together in The Attack Trilogy. She recently published her first short story about Leonardo da Vinci, in the anthology, Touch the Sky, Stories Inspired by the Saturn V. (Yes, she did manage to find a way to connect Leonardo to the Saturn V.)