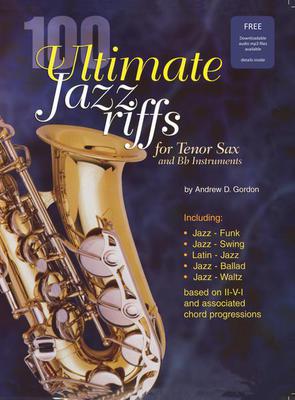 See more by Andrew D. Gordon
Get it now

Andrew was born in London England and moved to Los Angeles in 1979. In 1991 Andrew started a music educational publishing company A.D.G. Productions which has now published over 150 music instructional books with Andrew authoring over 80 books for piano/keyboards, woodwinds, guitar/bass, including such titles as "100 Ultimate Blues Riffs", "100 Ultimate Jazz Riffs", "Funky Organ Grooves", "Outta Sight Funk & R&B Riffs" "The Blues Scale" that are sold to and used by teachers and students throughout the world.

Andrew is an exceptional all round experienced keyboard player, composer as well as a guitarist, and his experience has enabled him to compose, produce and arrange music for many artists, TV Shows, film, theater, commercials including TV shows such as General Hospital and Oceanquest. He has worked with such notable artists as Gary Wright, Johnny Guitar Watson, Edwin Starr, Mike Pinera. His band The Super Groovers has received worldwide airplay on many jazz radio stations. Andrew is equally adept at playing and teaching in many styles including, Pop, Rock, Blues, Jazz, Funk & R&B, Gospel, Country.
Andrew plays in an instrumental jazz group called "The Super Groovers" where he co-writes all the music with saxophonist Frank Villafranca blending musical styles such as : Jazz, Blues, Funk, Latin, African, New Age, Gospel, Rock. They have released two albums Supergroovin' and Mainline Connection to critical acclaim available from various internet music retailers.

Andrew began his musical training at the age of 7, studying classical piano for 12 years. He has studied Synthesizer Programming at UCLA and was chosen to participate, by B.M.I., in their film scoring workshop, instructed by world renowned TV and film composer EARL HAGEN. Andrew also studied Jazz piano for 6 years with top jazz pianist MIKE GARSON.

With the success of his books, Andrew teaches many beginner to advanced music students from around the world using the internet, skype and webcam specializing in blues, jazz, rock, country, gospel piano playing, music production, songwriting, music career development, jazz improvising, music sequencing and programming, etc. He can be contacted at: musiclessons@adgproductions.com