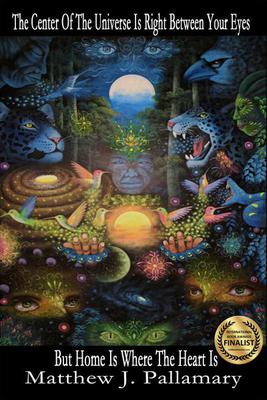 See more by Matthew J. Pallamary
ALL
EBOOK
PRINT
AUDIOBOOK
Get it now

Matthew J. Pallamary’s works have been translated into Spanish, Portuguese, Italian, Norwegian, French, and German. His historical novel of first contact between shamans and Jesuits in 18th century South America, titled, Land Without Evil received rave reviews along with a San Diego Book Award for mainstream fiction. It was also adapted into a full-length stage and sky show, co-written with and directed by Agent Red and performed by Sky Candy, an Austin Texas aerial group. The making of the show was the subject of a PBS series, Arts in Context episode, which garnered an EMMY nomination.

His nonfiction book, The Infinity Zone: A Transcendent Approach to Peak Performance  is a collaboration with professional tennis coach Paul Mayberry that offers a fascinating exploration of the phenomenon that occurs at the nexus of perfect form and motion.  The Infinity Zone took 1st place in the International Book Awards, New Age category and was a finalist in the San Diego Book Awards.

His first book, a short story collection titled The Small Dark Room Of The Soul was mentioned in The Year’s Best Horror and Fantasy and received praise from Ray Bradbury and has been released as an audio book.

DreamLand a novel about computer generated dreaming, written with legendary DJ Ken Reeth won first place in the Independent e-Book Award in the Horror/Thriller category and was an Award Winning Finalist in the San Diego Book Awards. It has also been released as an audio book.

It’s sequel, n0thing is titled after the main character, who in the real world is his nephew, an international Counter-Strike gaming champion. After winning what amounts to the Super Bowl of gaming, n0thing and his winning teammates, are recruited as a literal “dream team” whose mission is to go into the nightmares of battle scarred veterans and rescue them from their traumatic memories while becoming ambassadors for a gaming platform that exceeds virtual reality with an experience that pushes the boundaries of reality itself.

Eye of the Predator was an Award Winning Finalist in the Visionary Fiction category of the International Book Awards. Eye of the Predator is a supernatural thriller about a zoologist who discovers that he can go into the minds of animals.

CyberChrist was an Award Winning Finalist in the Thriller/Adventure category of the International Book Awards. CyberChrist is the story of a prize winning journalist who receives an email from a man who claims to have discovered immortality by turning off the aging gene in a 15 year old boy with an aging disorder. The forwarded email becomes the basis for an online church built around the boy, calling him CyberChrist. It has also been released as an audio book.

Night Whispers was an Award Winning Finalist in the Horror category of the International Book Awards. Set in the Boston neighborhood of Dorchester, Night Whispers is the story of Nick Powers, who loses consciousness after crashing in a stolen car and comes to hearing whispering voices in his mind. When he sees a homeless man arguing with himself, Nick realizes that the whispers in his head are the other side of the argument.

His memoir Spirit Matters detailing his journeys to Peru, working with shamanic plant medicines took first place in the San Diego Book Awards Spiritual Book Category, and was an Award-Winning Finalist in the autobiography/memoir category of the National Best Book Awards. Spirit Matters is also available as an audio book.

The Center Of The Universe Is Right Between Your Eyes But Home Is Where The Heart Is was an Award Winning Finalist in the International Book Awards. Based on a lifetime of research into shamanism, visionary states, the evolution of written communication and the roots of storytelling, award-winning author, editor, and shamanic explorer Matthew J. Pallamary takes those with open minds courageous enough to question the illusions that most of us think of as real on an expansive journey that pierces the veil of reality itself.

AfterLife: The Adventures of a Lost Soul was inspired by real life events, William Peter Blatty’s The Exorcist, and the dynamics of demonic possession.

Matt has also produced and directed The Santa Barbara Writers Conference Scrapbook documentary film and co-wrote the book of the same title in collaboration with Y. Armando Nieto, and conference founder Mary Conrad.

Death: (A Love Story) a first person narrative spoken by the omniscient voice of Death itself, who says, “I’m here to tell you stories and share some science, history, and myths, all of which are your creations that I want to share to help you understand me more. You have seen me as Satan, Anubis, Mot, Thanatos, God, the Devil, loving, punitive, dark, light – the list goes on and on! It is my sincerest hope that our friendly reintroduction here will change the way you think of me, and maybe in some small way reflect the depth of the love I have for you.

Picaflor is the sequel to Spirit Matters, a San Diego Book Award winner and an Award-Winning Finalist in the National Best Book Awards that chronicles the two decades since of Matthew (Mateo) J. Pallamary’s adventures in Spirit Matters through the mountains, deserts, and jungles of North, Central, and South America pursuing his studies of shamanism and visionary experience working with plant medicines and shamanic plant diets, among them Ayahuasca, Peyote, San Pedro cactus, and many more.

PICAFLORES: The Nerve Endings of GOD documents Mateo’s magical, otherworldly, intimate connection with the spirit of Picaflor which comes from two decades of visionary journeys experienced within the context of shamanic plant diets in the Peruvian Amazon. PICAFLORES also contains a treasure trove of pre-Columbian myths about hummingbirds and an in-depth collection of amazing facts and figures about these magical creatures. Although the content of the book’s formats are identical, the stunning preternatural beauty of hummingbirds can best be seen in the full color print edition, while the full color e-book edition contains active links to video listed in the printed editions, and the audiobook version has the added sounds of hummingbird hums, chirps, and buzzes.

Matt’s work has appeared in Oui, New Dimensions, The Iconoclast, Starbright, Infinity, Passport, The Short Story Digest, Redcat, The San Diego Writer’s Monthly, Connotations, Phantasm, Essentially You, The Haven Journal, The Hurricanes & Swan Songs Anthology, The Santa Barbara Literary Journal, The Closed Eye Open, The Montecito Journal, and many others. His fiction has been featured in The San Diego Union Tribune which he has also reviewed books for, and his work has been heard on KPBS-FM in San Diego, KUCI FM in Irvine, television Channel Three in Santa Barbara, and The Susan Cameron Block Show in Vancouver.  He has been a guest on the following nationally syndicated talk shows; Coast to Coast with George Noory, Paul Rodriguez, In The Light with Michelle Whitedove, Susun Weed, Medicine Woman, Inner Journey with Greg Friedman, and Environmental Directions Radio series. Matt has appeared on the following television shows; Bridging Heaven and Earth, Elyssa’s Raw and Wild Food Show, Things That Matter, Literary Gumbo, Indie Authors TV, and ECONEWS. He has also been a frequent guest on numerous podcasts, among them, The Psychedelic Salon, Black Light in the Attic, Third Eye Drops, C-Realm, Psychedelics Today, Voices in the Dark, Adventures Through the Mind, Beyond the Veil, and many others.

Matt received the Man of the Year Award from San Diego Writer’s Monthly Magazine and has taught a fiction workshop at the Southern California Writers’ Conference in San Diego, Palm Springs, and Los Angeles, and at the Santa Barbara Writers’ Conference for over thirty years.  He has lectured at the Greater Los Angeles Writer’s Conference, the Getting It Write conference in Oregon, the Saddleback Writers’ Conference, the Rio Grande Writers’ Seminar, the National Council of Teachers of English, The San Diego Writer’s and Editor’s Guild, The San Diego Book Publicists, The Pacific Institute for Professional Writing, The 805 Writers Conference, The College of Central Florida, Yakima Valley College in Washington, The Yakima Public School System, and he has been a panelist at the World Fantasy Convention, Con-Dor, and Coppercon. He is presently Editor in Chief of Mystic Ink Publishing.

Matt was a featured lecturer and performer at the Mysteries of the Amazon exhibit at the Appleton Museum in Ocala Florida and The Larson Gallery in Yakima Washington. He frequently visits the mountains, deserts, and jungles of North, Central, and South America pursuing his studies of shamanism.