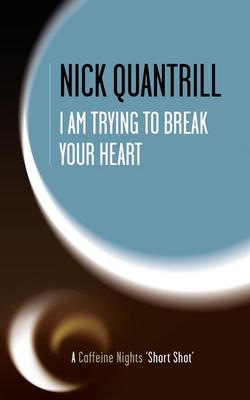 I Am Trying To Break Your Heart

See more by Nick Quantrill
Get it now

Nick Quantrill was born and raised in Hull, an isolated industrial city in East Yorkshire. From a young age, Nick has always had a fascination with crime novels, starting young by annoying the local librarians for Famous Five novels.

Never realising he could be a writer, Nick spent most of his twenties shouting and bawling his way around the Sunday League football pitches of the city, learning the hard way and meeting an impressive array of characters. With a handful of trophies and permanently damaged ankles to show for his troubles, football was swapped for education, spending the next six years studying of a degree in Social Policy. Approaching now or never time, Nick started writing crime stories set in and around his home city. Instead of just throwing them in a drawer and not letting anyone read them, the stories were made available for free on the Internet, and after winning the HarperCollins ‘Crime Tour’ short story competition in 2006, he started to build a readership.

Fast forward a couple of years and after much hard work, a few false starts and countless short stories, Nick completed ‘Broken Dreams.’ Focusing on Hull’s past and future; the novel looks at the death of the city’s fishing industry and explores the problem of how the city can build a new future for itself. ‘Broken Dreams’ also introduces us to Nick’s lead character; rugby league player turned Private Investigator, Joe Geraghty, co-owner of a small detective agency. Nick’s stories are both entertaining and thought provoking, and although the settings may be local to him, the ideas and issues resonate on a much wider basis.

When not writing fiction, Nick contributes reviews and essays to a variety of football and music websites. He lives in Hull with his wife, cat and the constant fear Hull City AFC will let him down.