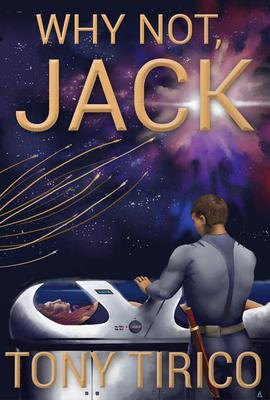 See more by Tony Tirico
Get it now

I've wanted to write science fiction and fantasy ever since the second grade when I figured out someone had to write it. When I had gotten an electronic typewriter for high school graduation, I began to write my first science fiction novel. It was crap. I hadn't had enough life yet to write the kind of story I wanted. I decided at seventeen I'd pursue a less risky career path and write after I'd gained more life experience.

After graduating from Oregon State University with a B.S. in Agricultural Engineering, I begin to write a fantasy novel on my Mac Plus while I applied for various engineering positions. An agricultural economic depression at the time gave me fifteen months to develop my writing skills. I completed fifteen chapters before I accepted a position as a civil engineer for a city.

Working as a professional civil engineer for twenty years, I didn't have much time to pursue writing. I tried to finish my first novel on weekends, but four word processors later, it still wasn't what I wanted it to be although it showed great promise.

When the housing bubble burst, I was laid off along with most of the engineers at the city. Burnt out from years of government bureaucracy and with no private engineering jobs available, I decided to retire my P.E. license and pursue writing. The day after being laid off, I fired up my Mac and the neglected right side of my brain then began writing a new hard science fiction novel, just to see whether I could finish it.

After finishing an awesome story, I realized I needed to learn how to professionally revise it. I studied books on writing and developed my new skills while writing a contemporary fantasy trilogy. With the first manuscript complete, the second in first draft and the third in outline, I had an epiphany. I think like an engineer; therefore, I should focus on hard science-fiction.

I truly enjoy writing and now have lived enough life to write well. I’m honing the skills, so I can craft as many novels as possible in my lifetime.