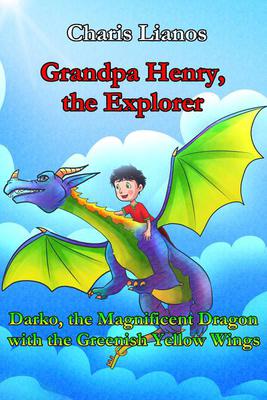 Grandpa Henry, the Explorer: Darko, the Magnificent Dragon with the Greenish Yellow Wings

See more by Charis Lianos
Get it now

Charis Lianos has been writing children's and adolescent literature for over seven years. From an early age, he had always had a very strong feeling for creative writing, and so far, he has published three books in Greek. Novels, fairytales, lyrics and poems are his passion. He was born and raised in Kalamata, a municipality in Messinia, Greece, where he lives invariably.

He graduated from the Department of Information Technology and Computer Networks at Technical High School of Kalamata with specialization in Computer Systems and Applications Support and from Vocational Training Institute of Kalamata as Specialist in Multimedia Information Technology. He loves learning new things and communicating in different ways.

In May 2015, “Stachtompouta and Spirtoulis, Love just like old times” his first book of children's and adolescent literature was published. This is a story that mentions real events. Events that, with the help of our four-legged friends, with the so much unconditional love they offer, unraveled this beautiful story. This book talks about love and more specifically about the love that develops between humans and animals.

In less than a year, in December 2016, "Eros, the son of the storm," his second book of modern fantasy literature was published. This is a fantasy book and takes us on a trip to the world of emotions and shares with us, family and non-family moments. Feelings, moments and desires of people have a dominant role in this book.

His third book of children's and adolescent literature “Stachtompouta and Spirtoulis, Like good old times…” was published in December 2017. The story continues in this book and new characters make their appearance. This book unravels the deep connection between a dog and his owner.

All three Charis Lianos’ books have been published by Universe Pathways Editions and are available on all up-to-date bookstores in Greece and Cyprus.

In his spare time, he enjoys working out at the gym, cooking, reading books and exploring the world.