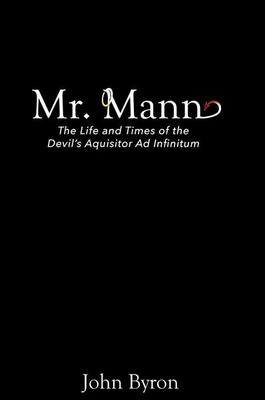 Mr. Mann - The Afterlife and Times of the Devil's Acquisitor ad Infinitum

See more by John Byron
Get it now

I have always loved books.

Ever since I learned how to read, I could not get enough material.
I was/am a voracious reader, and by the time I was in fourth grade I was at a twelfth grade reading level!
Problems on the home front edged into my studies though and I began to rebel against authority at a young age. Which is a sanitized way of saying that I was definitely a troublemaker and no stranger to the law. Nothing serious, mind you, but it was definitely “gateway” trouble.

I think there some subconscious policing going on in the back of my mind, because at the age of 17, I was done with the broken home life. I dropped out of high school and joined the military in search of something that I wasn’t quite sure of as of yet, but whatever it was that I was looking for, I would not find it within military life.
After I left the Army, I moved to Missouri, where my mother and step father had moved during my stint in the Army. I quickly discovered that time does not always heal all wounds, and after a couple years in Missouri, I packed all of my necessities into a duffle bag and thus began a three year hitchhiking odyssey that would take me across the continental United States, Canada and Mexico. I met a lot of people, some interesting, some not so much, and others who were just plain unsavory.
I should be dead by now, but somehow, I survived all of that, and it was during my travels that I began writing poetry.

I kept my scribbles in a binder in which I would fill with thoughts twisted into a dramatic monologue that finally gave me the outlet that I had been searching for. I still have that binder to this day and I am working on a trilogy set of the poetry that will see the light of day at some point.

It took me 10 years to tire of writing poetry. I felt like I was being lazy with myself, and whenever I find myself getting a bit too comfortable, I tend to push myself into a “point of no return” position.
So, since I felt that my writing was ready for more of a challenge, I began writing some of the ideas that had been bouncing around my mind over the years. Over the next 15 years, I would pen screenplays, short stories and novellas before eventually writing my first novel, Mr Mann.

Until I became that full time writer that I have always dreamed of, I had to work. You know… money and that kind of stuff. Eventually, I found a career in the industry of Information Technology. I am “basement taught” as I like to put it. I learned my computer and networking “skills” using the break/fix method at home and eventually landed myself a position at a firm in Minneapolis, Minnesota, where I have been for going on 20 years now.

I live in Minneapolis, Minnesota with my wife, Brenda and two insane cats.