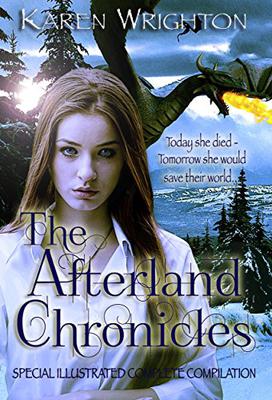 See more by Karen Wrighton
Get it now

An established British Author, Karen Wrighton is an Amazon bestselling author of books for teenagers and for adults with teenage hearts. Karen's books are a blend of everything she loves to read - tales of Magic, Mystery, and Mayhem!

Most of Karen's work falls under the broad umbrella of Speculative Fiction, a genre of fiction that involves supernatural, futuristic, or other imagined elements. This encompasses the traditional genres of Fantasy, Science Fiction, Horror, Supernatural Fiction and Science Fantasy.

This eclectic genre provides Karen with the flexibility to write stories which, appear to be very different from one other, yet maintain that 'other worldly' element which characterizes her work.

Karen’s début novel ASCENSION OF THE WHYTE became an Amazon Bestseller, as did the second in the series RYTE OF PASSAGE. The Afterland Chronicles series, described as Lord of the Rings meets Harry Potter, will be completed in 2017 with the release of ICE AND FYRE, the third book in the series.

Karen’s Post-Apocalyptic, Dystopian novel, THE LAST GIRL GUIDE, also won high praise. Breaking with the current trend for ‘Zombie’ Apocalypse books, the novel has been favorably compared to similar works of speculative fiction such as ‘The Road’ and ‘The Girl With All The Gifts’.

Karen has two daughters and lives in a small cottage in rural Norfolk, England with her husband John, crazy dog Jinks, and Pippin, their remarkably lazy cat.

You can find Karen at www.karenwrightonbooks.com