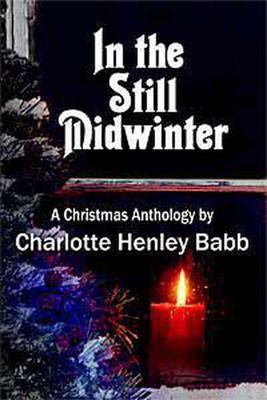 In the Still Midwinter

See more by Charlotte Henley Babb
Get it now

Charlotte Henley Babb, presently living in Spartanburg, SC, is originally from the Charlotte, NC, area.  She began writing when she could hold a piece of chalk and scribble her name--although she sometimes mistook "Chocolate" for "Charlotte" at the ice cream counter. She writes fractured fairy tales, steampunk, and Southern fiction for people who have survived love's last kiss.

​​​​​​​Her first novel, Maven Fairy Godmother: Through the Veil, was published in 2012 and received an honorable mention in the 2014 National Federation of Press Women communications contest for adult novels, and won the Sharp Writ Book Award for Fantasy and Science Fiction in 2014. Other writing credits include articles in Circle magazine, an inspirational piece in the Upper Room, and several collections of short stories. Her latest novel, 20 hours to Charles Town, was released in 2019.

In third grade, Charlotte discovered Louisa Alcott and Robert Heinlein, an odd marriage of the minds. These two authors have had the most influence on her to explore how the world might be made better. ​​​​​​​She has studied the folk stories of many cultures and wonders what happened to ours. Where the stories are for the coming of middle age for people who have survived marriage, divorce, child-rearing, education, bankruptcy, and widowhood?
​​​​​​​
​​​She is the first college graduate in the history of her family, and the second high school grad, after her mother. While she has done many other things, as her mom suggested, teaching has always supported her true vocation: writing. Babb earned a Bachelor of Science in English/Education from Appalachian State University in Boone, NC, a Masters of Secondary Education from Winthrop University in Rock Hill, SC, and  a Master of Arts in Humanities from Pacifica Graduate Institute.

​​​​​​​Her studies have focused on writing, mythology, special needs learners, personal growth, and computer applications. Graduate school in California gave Charlotte perspective on her Southern heritage. She studies mythology to deepen her work with themes from ancient sources. Sharing perspectives with people from across the country lets her delve into the cultural notions that are as invisible as water is to fish, fertilizer for the soul!

​​​​​​​ For the first eighteen years of her work life, she taught remedial English at three rural high schools, mostly to students in technical programs or in the bottom quartile. She taught at community colleges online and on ground since 1991. She was web designer and e-newsletter editor at a private professional college from 2008-2015, as well as volunteering for a writers association from 2005 to 2011.

Each job has given her more insight to the challenges involved being human and living in the human condition. She is a mistress of juggling time and energy. She still reads the Tarot, but not for money. She has been married twice, is now single, and has one daughter, a freelance illustrator of fantasy and science fiction