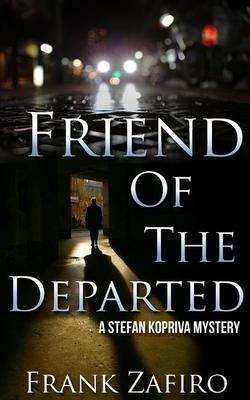 Friend of the Departed

See more by Frank Zafiro
Get it now

In 1993, he became a police officer in Spokane, Washington. During his career, he worked as a patrol officer, corporal, and detective. In 2002, he became a sergeant and entered into leadership roles. He was fortunate enough to command patrol officers, investigators, the K-9 unit, and the SWAT team.

Frank retired from law enforcement in 2013 as a captain in order to write full time and to teach. From 2013-17, he taught law enforcement subject matter at community college, university, and as an independent consultant for an international non-profit. He also occasionally teaches a series of writing workshops, but mostly he worked on being a full time writer.

River City is also the setting for Frank’s series of Stefan Kopriva mysteries, and Some Degree of Murder, a novel written with Colin Conway. Novels such as The Last Horseman and At Their Own Game are set in Spokane proper, while other books include a variety of different settings, such as the Ania series with Jim Wilsky (set in Chicago, Las Vegas, Northern California, and the Florida coast). The Bricks and Cam Job series he wrote with Eric Beetner has a distinctive east coast flavor, as do his novels with Lawrence Kelter (The Last Collar, Fallen City). He has also partnered with Bonnie R. Paulson in their thriller, The Trade Off, set in Spokane and North Idaho.

In addition to novels, dozens of Franks’ short stories have been published in magazines (print or online) and numerous anthologies. He is a three-time finalist for the Derringer Award (given by the Short Mystery Fiction Society).