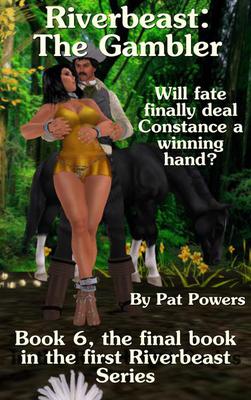 See more by Pat Powers
Get it now

Pat Powers may not be the most interesting man in the world, but when he writes about himself in third person, he tries to give that impression.

Pat Powers is an editor and writer who lives in the Deep South. He has seen alligators, bears, rattlesnakes, water moccasins and copperheads in the wild. And not in parks, either, but in the woodlands that are so abundant in Georgia. (OK, ONE of the alligators he's seen in the wild was in a park.) He has also seen Southern Baptist fundamentalists in the wild. THEY'RE the scary ones!

You can check out his blog at http://patpowersrocks.blogspot.com/ and find links to all his books in all countries here: http://www.bondagerotica.com/bookstore-links/international-bookstore.html. You can email Pat Powers at patpowers1995@yahoo.com.

Pat Powers enjoys reading, gaming in his favorite virtual reality (Second Life), cycling, travel, dining out and watching hilariously bad B movies. He loves to laugh and to make others laugh. He believes the secret to writing about adult topics is to bring one's humanity to the topic, and let it inform the humanity of the characters. Plus, keep it raunchy!

Pat Powers is the author of a number of stories and novels, many of which features Strong Sexual Content, including Karg, Riverbeast, President Slave Girl, Siren7 and many others. His blog is Pat Powers' Wholesome Author Blog.

Among his favorite movies are Deathstalker, Barbarian Queen, Slave Girls From Beyond Infinity, Fencer of Minerva, Thor and the Amazon Women, Vicious Circles, and many others, to give you some idea of his general lack of taste.

Among Powers' favorite books are Little Big, Far Tortuga, Declare, John Norman's Gor novels, Nine Princes in Amber, Iain Banks' Culture novels, A Fire Upon the Deep, Rex Stout's Nero Wolfe novels and John Parker's Spenser novels. Not all of these are works of complete genius, though Powers would say Little Big and Far Tortuga might well be. Powers has to skip over large tracts of text in Norman's Gor novels when he starts ranting about antibiological negativism, and when John Parker's Spenser starts mooning over his girlfriend, it's time to move on as well. But who's perfect?