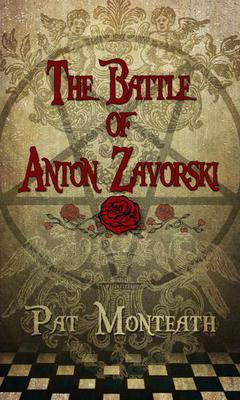 The Battle of Anton Zavorski

See more by Pat Monteath
Get it now

PAT MONTEATH was born in Wembley but moved to Yorkshire at the age of 3. His early years were spent in the West of the county where he attended local schools in Bingley, Ilkley then Bradford City High School. Upon leaving school he attended Hull College of Advanced Technology where he studied Electronics. After qualifying he moved back to London - worked for Decca and later worked for Her Majesty’s Government.

Pat started writing when he was 9 and has, since then, written a vast number of poems about hundreds of subjects. He's been published in the USA/Canada and the UK. In 2000 was short-listed for a short drama competition run by channel 4 television.

In 2003 - Who pays the Ferryman? - a psychological thriller with espionage overtones and murder, was the first of the ‘Ferryman’ trilogy. Based on fact and published by Quill Publishing it was quickly taken up by Waterstones and Borders (UK).

Who pays the Ferryman? - the first one in the 'Ferryman' trilogy - has now been placed under option for a film/drama.

A fourth book in the espionage series - The Waiting Game - is also expected to be released in the near future in digital format.

The Waiting Game is coming soon as an e-book and is an exciting read about the mysterious death of a media tycoon.

How is this mysterious death linked to Israeli intelligence and Svetlana Zaslavsky, an attractive young woman, born of Russian Jewish parents?

To date Pat has written seven books of which four have enjoyed success as paperbacks. It is planned to reproduce them all as e-books.

His latest book to be published, The Ritual is, for now along with the other books in the occult thriller series, only available in digital format.

Visit http://www.quillpublishing.co.uk to find out more about the media reviews of the 'Ferryman' espionage books.