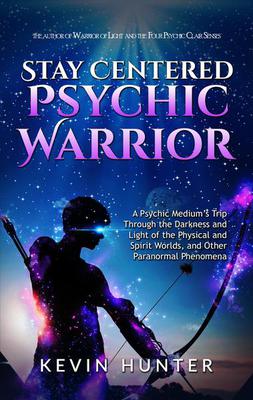 Stay Centered Psychic Warrior: A Psychic Medium’s Trip Through the Darkness and Light of the Physical and Spirit Worlds, and Other Paranormal Phenomena

See more by Kevin Hunter
Get it now

Kevin Hunter is the author of nearly two dozen metaphysical spiritual books.  The messages and themes he weaves in his work surround both the practical and spiritual.

His spiritually based empowerment books include Warrior of Light, Empowering Spirit Wisdom, Darkness of Ego, Transcending Utopia, Realm of the Wise One, Living for the Weekend, Reaching for the Warrior Within, Ignite Your Inner Life Force, Awaken Your Creative Spirit, and Tarot Card Meanings.  His metaphysical pocket books series include, Spirit Guides and Angels, Soul Mates and Twin Flames, Raising Your Vibration, Divine Messages for Humanity, Connecting with the Archangels, Four Psychic Clair Senses, Twin Flame Soul Connections, Monsters and Angels, Attracting in Abundance, Abundance Enlightenment and The Seven Deadly Sins.  He is also the author of the dating singles guide Love Party of One, the horror/drama, Paint the Silence, and the modern day erotic love story, Jagger’s Revolution.

Before becoming an author, Kevin started out in the entertainment business in 1996 as the personal development guy to one of Hollywood’s most respected talent, Michelle Pfeiffer, for her boutique production company, Via Rosa Productions, along with her producing partner, Kate Guinzburg.  Pfeiffer dissolved her company after several years and he made a move into coordinating film productions for the studios on such films as One Fine Day, A Thousand Acres, The Deep End of the Ocean, Crazy in Alabama, The Perfect Storm, Original Sin, Harry Potter & the Sorcerer’s Stone, Dr. Dolittle 2, and Carolina.   He considers himself a beach bum born and raised in Southern California.