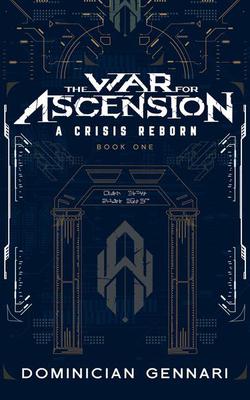 The War for Ascension: A Crisis Reborn

See more by Dominician Gennari
ALL
EBOOK
PRINT
Get it now

Dominician grew up in the rough western suburbs of Melbourne, Australia in the 80's after his migrant parents fled war-torn Europe after WW2. As a young child, he would fantasize about imaginary creatures living in his backyard and he would dream of magical worlds. This all changed in secondary school as the entrenched scholastic systems in Melbourne, Victoria was designed to strip the individual of imagination, creativity, and free thought. After signing his name at the top of his final Year 12 examination, he rose from his chair in the middle of the school gymnasium and walked out, leaving the exam half blank.

In 1998 Dominician entered the workforce taking on a laborious factory job. Battling depression and anxiety he dreamed of becoming a successful musician in his Industrial-Rock band. Eventually, he landed a job at a music store where he developed recording and music production skills. During his lengthy lunch breaks working at the music store, Dominician would venture into the major book stores in the CBD and there he discovered his literary hero, J.R.R. Tolkien. Inspired by the rich texts and luscious descriptions in Tolkien's writings, he once again discovered the magic of story and myth. These daily visits to the book store set about an insatiable desire for knowledge, and he devoured books on astronomy, religion, and the ancient world.

As the years progressed Dominician developed his mythical world called, Númaria, creating a history and ecosystem to harbour the vast timeline of the unfolding story.

Submerging himself in the fields of forbidden archaeology, esoteric wisdom, USAPs of the US government, and ancient warfare, a great awakening occurred as the veil of secrecy was lifted from his eyes. After learning humanity's obscured past was stranger than fiction, his desire to create a truthful and artistic message through fiction arose. This acquired knowledge segued into writing his epic fantasy series The War for Ascension.

Dominician's mythical stories are founded in ethics, right action, and truth, in the hope to awaken humanity from the established deceptions of our current times.

Having spent over two years working alongside a renowned Hollywood producer and a renowned Hollywood scriptwriter, Dominician garnered invaluable knowledge of screen craft and storytelling. But due to unforeseen events, border lining on horrific, Dominician turned down Hollywood and millions of dollars to pursue his dream of writing wholesome fantasy stories founded in truth, ethics, and right action!

Guided by fantasy author and genius, David Farland, Dominician is set to expand his grand mythology, THE WAR FOR ASCENSION into a multi-book and novella opus, along with an accompanying album of Epic Instrumental music through his music project called; ARK of LIGHT - www.arkoflight.net

Dominician is also a highly trained Brazilian Jiu-Jitsu instructor, and a BJJ National Champion. He currently lives in Melbourne, Australia.