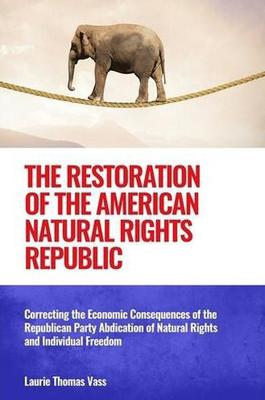 The Restoration of the American Natural Rights Republic: Correcting the Consequences of the Republican Party Abdication of Natural Rights and Individual Freedom

See more by Laurie Thomas Vass
Get it now

GABBY Press is the publishing company of The Citizens Liberty Party News Network. The Gabby website is owned by Laurie Thomas Vass, the General Partner, and author of books at Gabby Press and of articles at CLPnewsnetwork.com.

She is a graduate of the University of North Carolina at Chapel Hill, with an undergraduate degree in Political Science and a Masters degree in Regional Planning.

She was a solo practitioner registered investment advisor for 30 years. She was cited by Peter Tanous, in The Wealth Equation, as one of the top 100 private money managers in the nation.

She is the inventor and holder of a research method patent on selecting technology stocks for investment.

The method explained in her patent is based upon her theory of how technology evolves.

She is the author of 12 books and over 130 scholarly articles on the Social Science Research Network author platform, and is currently ranked in the top 1.1% of over 580,000 economic authors, worldwide, on the SSRN platform.

She has an interest in the topic of entrepreneurship. One of her early economic research papers, written for the North Carolina Department of Labor, included the policy guidelines for creating what eventually became The North Carolina Council For Entrepreneurial Development.

Prior to starting her investment advisory company, she was a regional economist and advisor to the Board of Directors of  B.C. Hydro, and also served as an economic advisor to the N. C. Commissioner of Labor. She learned the retail stock trade as a broker, at E. F. Hutton.