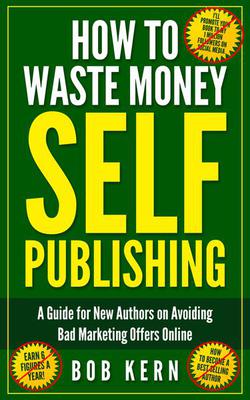 How To Waste Money Self Publishing

See more by Bob Kern
Get it now

Bob is the author of the award-winning series We Were Soldiers Too.   Due to the overwhelming support and response from other Cold War Veterans, there are plans for twelve books in the series.  We Were Soldiers Too is a Cold War documentary series that tells the history of the Cold War from the perspective of the veterans who served during this critical time in history.

The first book in the series was about his time in the military and was a finalist for Nonfiction Autobiography of the Year in 2015 with the Independent Authors Network.

Book Two is on serving in Germany during the Cold War.  It has won awards in numerous contests in the nonfiction category.  The book received a Bronze Medal from the Nonfiction Authors Association.  It was a Finalist for eBook of the Year with Next Generation Indie Book Awards, Finalist for Military History Book of the Year with National Indie Excellence Awards, Finalist for Nonfiction History with Independent Authors Network.  Most recently, it won third place and the Bronze Medal from the prestigious Dan Poynter’s Global eBook Awards in the Nonfiction- Military category and Honorable Mention in Nonfiction- History with one of the largest book contests, the Reader’s Favorite Book Awards.  It was also awarded a 5-star review for Readers Favorite Books.

Book three, serving in Korea during the Cold War, was named Nonfiction Military History BOOK OF THE YEAR.  He is currently working on the fourth and fifth book in the series for release at the end of 2016.

Bob is the father of five children - Natalie, Bambie, Amber, Bob, and Rob. He resides in Bedford, Indiana with his wife Marsha and his three granddaughters; Sage, Jade, and Harmonie.

Bob enjoys connecting with US veterans and sharing their stories with others.